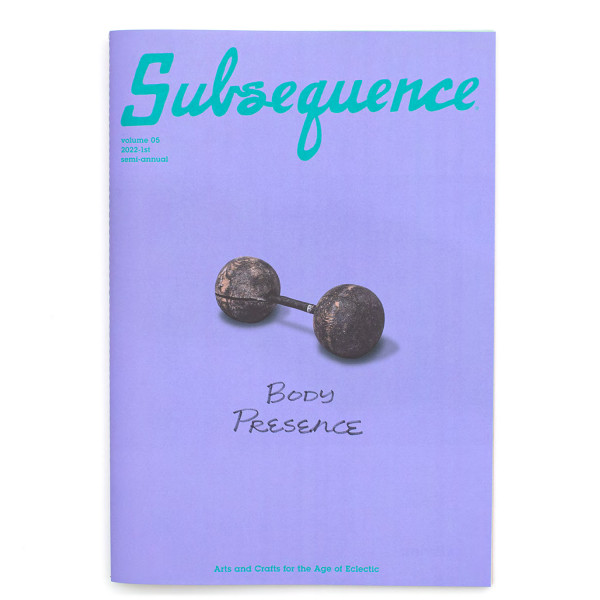 As in the previous issues, the Visvim Subsequence Magazine Vol. 5 follows the tagline 'Arts & Crafts for the Age of Eclectic.' This experimental project covers a wide range of arts, crafts and cultures, inclusive to all ages, genders and nationalities, featuring both Japanese and international contributors.

The theme for this issue is 'Body Presence'. Our ability to travel and move around freely has been severely limited over the past couple of years, and we have fallen into habits of placing a multitude of parts from our everyday lives onto the internet and virtual spaces. In reaction to this, I've been struck with a desire to think more about the importance of physical sensations. In this issue we have interviewed many individuals whose careers are based on forms of expression—artists, designers, musicians—and have asked them about the relationship between their work and the physical body. We have also featured a whole range of articles introducing and exploring lesser-known handicrafts, art, and culture from around the world. We hope you will enjoy the beautiful visuals as well as the in-depth content of the written articles.

One of the issue's features titled, 'Body Moving', conducts interviews with Mike Ableson (POSTALCO / Designer), Jony Ive (Product Designer), Junya Noguchi (Kukangendai / Musician), Johanna Jackson (Artist), and more, all of whom consider the presence of the human body in their work.

Not only that, we've got a discussion with visvim's Hiroki Nakamura during a visit with him to Kyoto's antiques market, the story of the Japanese woman who intro- duced indigo-dyed fabric from China, 'Raninkafu', that was previously unknown in Japan, an interview with Maureen Doherty the founder of London's legendary clothing store, 'egg', and an on-site interview with a Kewa tribe turquoise artist Ray Lovato.

The special supplement for this issue is called, 'My Archives: A Handmade Mini- book', in which readers can make a book themselves by removing a number of saddle-stitched pages from the issue. There are two DIY books which contain re-edited versions of twelve articles from Hiroki Nakamura's serialization 'My Ar- chive'—which ran from 2012 for six years in the magazine POPEYE—these never before seen twelve articles were not part of the published collection of essays from the My Archive book (2018, Magazine House).

Shop VISVIM online at Firmament with world wide shipping or buy directly at our store in Berlin, Germany. Tax Free delivery outside EU.