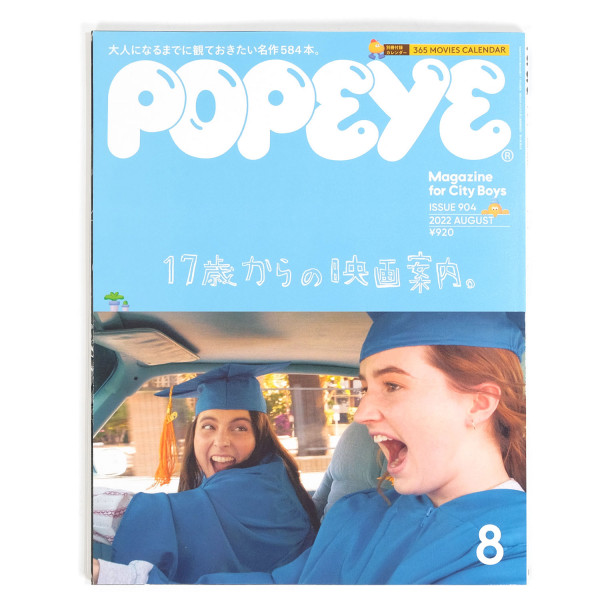 Description
Description
POPEYE magazine is the 'Magazine for City Boys'. The founders printed this on the cover of the... more
Close menu

POPEYE magazine is the 'Magazine for City Boys'. The founders printed this on the cover of the magazine when it debuted in 1976. What’s a 'city boy'? The term doesn’t appear in the dictionary and no expert panel could define it. So we felt we should explore every aspect of what this 'city boy' might be. After decades of debate, it still makes for a topic of lively discussion. It can be a style or a way of thinking. To get an idea of what makes a city boy, read POPEYE magazine.

It's never too early or too late to start watching movies. But I think it's good to see a lot of things while you're young. This time, we have prepared a lot of masterpieces that we want you to see before you grow up. Movies that influenced the life of that person you care about, eternal youth movies, MCU in K culture, and the history of movies.

- Academy Award-Winning Director Barry Jenkins asks 'What It's Like to Watch a Movie'
- the movie I wish I could have seen when I was 17
- Popeye's youth culture eiga shimpo
- from A24 subscriptions to James Gunn podcasts, the latest topics in youth culture related to movies
- seishun movie scrapbook
- hobbies, club activities, part-time job, house party total damage...
- great research on the ecology of teens depicted in American movies
- ENDLESS SUMMER
- a fashion story with the theme of youth movies
- 'what is youth in the first place', Mr. PTA?
- about youth as directed by Paul Thomas Anderson.
- a whirlwind tour of 130 years of film history with Mark Cousins
- a director who is a movie nerd will tell us about the history of movies that spans about 130 years
- find Y2K movies!
- masterpieces from the early 2000s recommended by Sho Miyake.
- K culture and dazzling Korean movies
- interview with movie stars
- hello, work in movies
- popeye Magazine is in Japanese